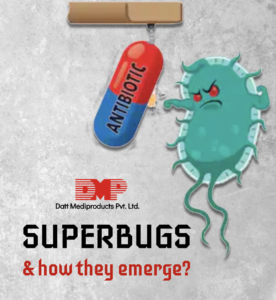 “Superbugs” refers to those strains of bacteria which have become resistant to most of the antibiotics, available at present. Merriam Webster dictionary defines a Superbug as “a pathogenic microorganism and especially a bacterium that has developed resistance to the medications normally used against it”.

The superbugs cause many dangerous infections like pneumonia, tuberculosis, urinary tract infections and skin infections to name a few. As per WHO, in 2016, nearly 5 lac people developed multi-drug resistant TB globally.

Superbugs with antibiotic resistance are a threat to the healthcare industry because the drugs become ineffective and the infection persists in the body, with increased chances to spread to others. This is due to the overuse and misuse of antibiotics. With the absence of effective antibiotics, success rates of the major surgeries may also be compromised.

The superbugs have been classified based on the risk factor, in a report released by the Centre for Disease Control (CDC) and Prevention, “Antibiotic Resistance Threats in the United States, 2019. Some common superbugs include MRSA, ESBL, VRE, Streptococcus pneumoniae, Pseudomonas aeruginosa, Shigella, Campylobacter, Mycobacterium tuberculosis, some strains of Candida & Salmonella (as described in our last blog “VELVERT TM: Herbal Antimicrobial Barrier Dressing”).

The published CDC report also mentions those superbug strains that have the potential to become resistant in the future. These include:

Do you know that most of the doctors use carbapenem antibiotics to treat severe and other high-risk bacterial infections? Acinetobacter and Enterobacteriaceae are those bacteria that have developed resistance to even carbapenems.

Few strains of bacteria have even developed resistance to sanitizers, such as the alcohol-based disinfectants that many hospitals use. As per a report “Increasing tolerance of hospital Enterococcus faecium to handwash alcohols” published in the Science Translational Medicine 01 Aug 2018”, the strains of E. faecium isolated after 2010 were found to be 10 times more tolerant to alcohol disinfectants than their older isolates.

There are no special symptoms of infections caused by superbugs. However, the infection doesn’t respond well to the treatment and if the symptoms get worse may indicate a superbug infection.

How can we prevent the evolution of these superbugs?

It is well understood that superbugs emerge whenever there is a misuse of antibiotics; people living or working in unhygienic/ unsanitary conditions or having poor infection prevention and control practices.

The emergence of superbugs may be avoided by preventing antibiotic resistance. This can be done either by using antibiotics only when needed or as prescribed by the physician; or by completing the therapy course even if the symptoms vanish or you feel better, and by not sharing your antibiotics with others or by never using the leftover prescribed drugs.

A case of a novel Coronavirus:

There is not much known about this novel virus but it appears to be spreading from person-to-person by respiratory droplets when someone coughs or sneezes. Symptoms can be mild to severe and include fever, cough, and shortness of breath. They may appear two to 14 days after exposure to the virus.

WHO and CDC recommend taking the following precautionary measures to help prevent the spread of respiratory viruses:

We, Datt Mediproducts, understand that prevention is better than cure and is one of the most crucial ways to fight superbugs. Practicing safe hygienic methods, washing hands-on regular intervals, practicing safe sex and following safe cooking methods can help prevent infections.

We also recommend eating a healthy diet, getting enough sleep, exercising and maintaining a healthy lifestyle to boost your immunity.

Above all DO NOT MISUSE ANTIBIOTICS because there are not any new antibiotics in the pipeline and we rely on antibiotics to deliver modern health care.