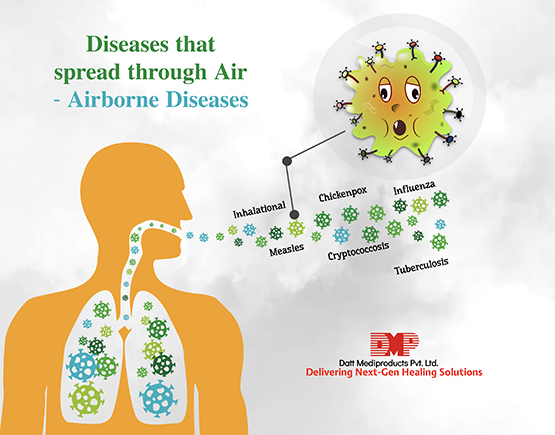 Overview – WHAT ARE AIRBORNE DISEASES?

Airborne diseases are those, which are caused by microorganisms and spread through the air. These are mostly caused by pathogens like bacteria, fungi or viruses and are expelled into the air due to coughing, sneezing or talking.
Climatic factors such as humid conditions and persistently high temperature might also increase the risk of contracting airborne diseases. High humidity levels promote aerosol growth and deposition in the respiratory tract. On the other hand, loss of water is the greatest environmental stressor for the microorganisms to stay viable.

Several treatment options are available which we should know along with prevention techniques to avoid catching such diseases. We @ Datt Mediproducts bring to you some facts about these airborne diseases and preventive measures.

Pathogens that cause airborne diseases cling to dust particles, moisture droplets, pollens, etc. These are picked up while breathing or through body fluids like mucus and phlegm. The disease-causing microorganisms multiply once inside your body.

Some common airborne diseases may include:

Some uncommon airborne diseases include:

Now that we have understood that these airborne diseases spread by cross contamination while an infected person coughs, sneezes or even talks, we @ Datt Mediproducts recommend following the required preventive measures so that the risk of contracting airborne diseases can be reduced.