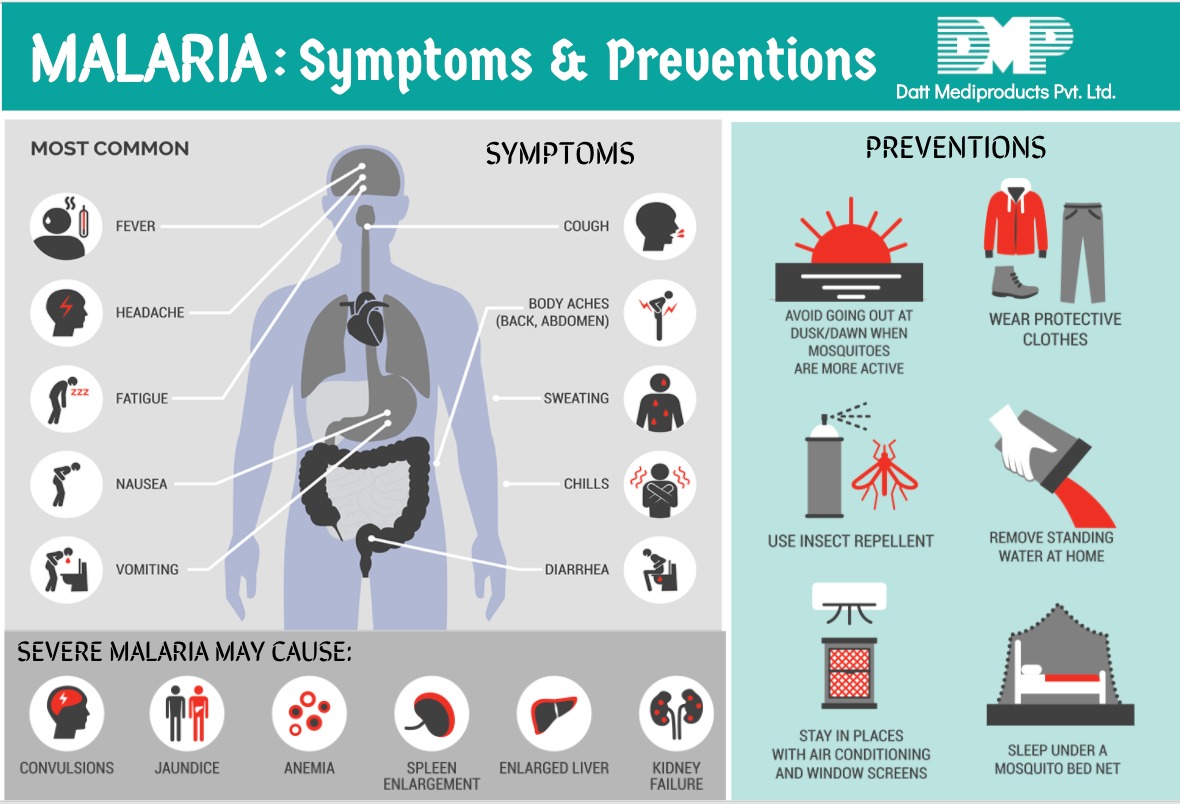 Malaria is a parasitic infection that results in a variety of symptoms ranging from no symptoms to mild to severe disease and even death. Ordinarily, malaria is a curable disease if it is diagnosed at an early stage and proper treatment is provided to the sufferer.

In our last blog “Stay Safe from the Monsoon Diseases”, we reviewed the distinctive characteristics of Malaria in addition to its differences from Dengue. We also considered its complications and treatment method in brief.

In this blog, we are going to discuss the preventive measures of the disease.

Controlling Malaria is difficult because of the adaptable nature of the vector and parasites. Prevention is an important component in the control of Malaria spread. Malaria prevention can be aimed at either preventing the disease (suppression) or by preventing infection with the parasite.

Chemoprophylaxis: While research is ongoing for the development of malaria vaccines, there is no drug available at present. However, chemoprophylaxis is one of the preventive measures which can be chosen by the travelers of malaria-endemic countries. The choice of drugs may depend upon the age of the traveler, pregnancy status, travel destination, seasonality of transmission, duration of exposure to vectors, and parasitic resistance pattern.

– While these prophylactic antimalarial drugs do not prevent infection through mosquito bites, they prevent the development of parasites in the blood.

– Pregnant women are one of the most vulnerable groups and may receive antimalarial drugs during the second/third trimesters of pregnancy on being advised by their doctors only. This is called as “Intermittent Preventive Treatment” (IPT).

Personal Protective Measures: The other complementary measure on which malaria prevention is currently based is the following personal protective measure against mosquito bites. The causing organism Anophelesmosquitoes mostly feed at night, thereby its transmission also occurs at night.

Another protective measure that everyone can follow is using insect repellents on exposed skin areas.

However, the choice of repellents can be done based on the composition concentration as per the age of the users.

– Preventing Infection: Malaria infection can be prevented when we prevent bites from malaria-carrying Anopheles This must be done indoors and outdoors too.

– Mosquito Control: This can be done by reducing the contact of mosquitoes with humans, destruction of vector’s larvae by the use of larvicides or predators, and destroying the adult vectors by using insecticides.

While steps are being taken to fully eliminate malaria, it would require eradication. Although eradication is desired by the most, it is an unrealistic goal for the countries where malaria is endemic.

We @ Datt Mediproducts recommend using mosquito repellents as instructed on specific product labels and wearing long-sleeved tops/shirts with long trousers to avoid skin exposure and using mosquito nets while sleeping.
Small measures could be of great importance in controlling and preventing this disease.