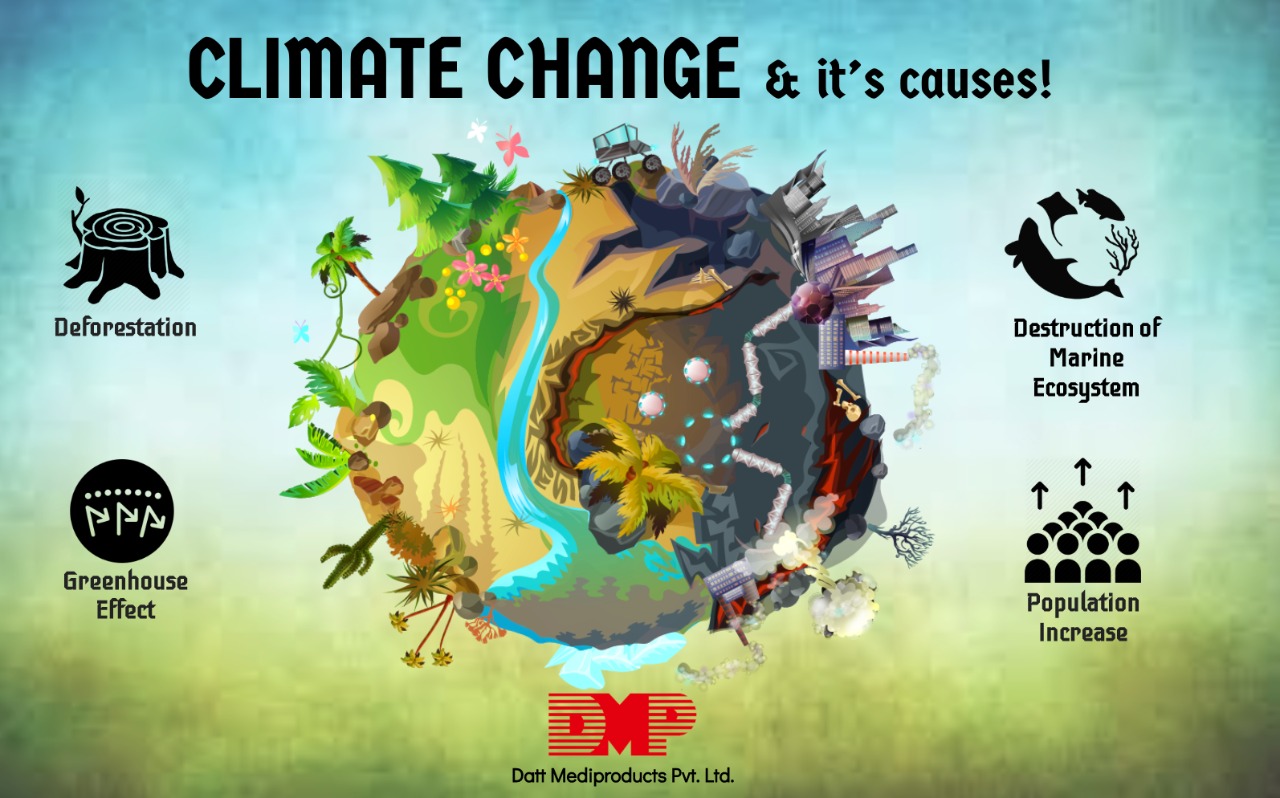 What is Climate Change?
Climate change refers to the change in the average surface temperature on Earth. The average temp. on our planet has been 15˚C, but the past few years have seen drastic variations in the same, both up and down. Scientists say that temperatures are rising at a faster pace than ever.

There may be several reasons for climate change as per scientific consensus, primarily being the overexploitation of fossil fuels by humans and deforestation. This results in the release of carbon dioxide & other greenhouse gases, such as methane and nitrous oxide, into the atmosphere.

These gases remain trapped in the atmosphere and impose various negative effects on the ecosystem. It may include a rise in the sea level, extreme weather conditions, melting polar ice, floods, droughts causing wildfires.

Do you know that since the industrial revolution began in 1750, the levels of CO2 have risen by 30%?

Although we do use the words, “Climate Change” and “Global Warming” interchangeably, these are two different phenomena. While Climate Change refers to the long-term changes in the average weather conditions/climate, Global Warming is the phenomenon of heating of the planet’s climate system.

As per NASA, Global Warming is most commonly measured as the average increase in Earth’s global surface temperature and Climate Change refers to the average weather patterns that have come to define Earth’s local, regional and global climates.

Some data from the World Meteorological Organization (WMO):

1. The world’s 20 warmest years have been recorded in the past 22 years.

4. Melting ice is attributed to be the main reason for rising sea levels.

5. Most glaciers in temperate regions of the world, whether the West Antarctic Ice Sheet, East Antarctica, or the Greenland Ice Sheet, are retreating.

6. Satellite records depict a dramatic decline in Arctic sea-ice since 1979.

Following are the various anthropogenic causes of climate change:

Greenhouse Effect:
It may be caused by the burning of fossil fuels, construction, livestock production, excessive use of fertilizers, industrial activities increase the greenhouse effect by increasing the temp.

Deforestation:
Plants & trees perform photosynthesis and absorb CO2 while returning O2 to the atmosphere. Heavy deforestation has opposite effects on the ecosystem as it releases sequestered carbon into the air. Forest degradation contributes up to 20 percent of global carbon emissions.

Destruction of Marine Ecosystem:
Oceans act as carbon sinks and have the ability to absorb up to 50% of CO2 With the greenhouse effect, the increasing CO2 levels acidify the ocean, causing the death of marine flora & fauna.

Population Increase:
An increase in the global population level speeds up the increase in greenhouse gas emissions from all production processes.

Earth Heating Up by two degrees.  Is it significant?

Over a period of the last few years, the temperature on our planet has risen by two degrees Fahrenheit. Although the number may sound low it’s actually impactful. A mere 2˚ change in temperature has melted our glaciers, rising the seawater levels, global warming, floods, droughts, etc.

Excessive agriculture and road construction also lead to local warming & cooling.  Follow our next upcoming blog to know how climate change is impacting our lives and can we tackle the situation.